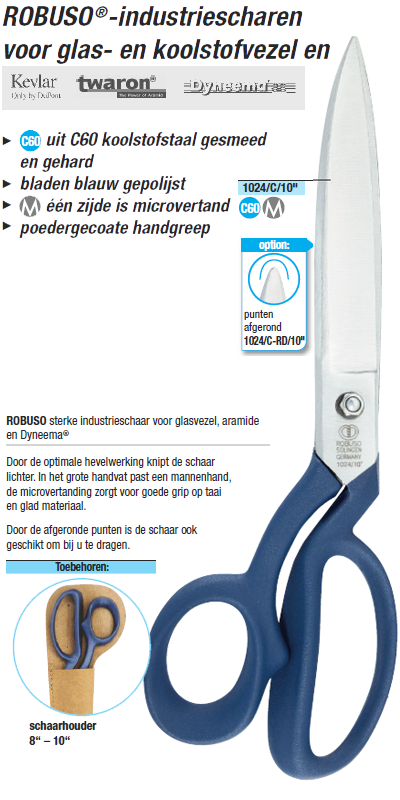 The scissors with our brand ROBUSO are of our best quality. They are equipped with our pretzel logo and the text ROBUSO SOLINGEN GERMANY.

SOLINGEN not only reflects the pure origin but is rather a quality characteristic. After the "Solingen decision - to protect the name SOLINGEN", only plastic products produced in SOLINGEN must bear this characteristic. In addition, minimum requirements are set for quality, which are far surpassed by our scissors.

We use C60 carbon steel for most cutters. This steel has a particularly high carbon content and can be hardened to a hardness of 57-59 HRC. This guarantees the high cutting resistance of our scissors.

The C60 steel is delivered to the smithy in meters long meters and is cut into pieces there, in lengths depending on which scissors they are used for. The steel is heated and then placed on a mold of the type of scissors and punched out with great force. The model that has now been created is being trimmed to the blade and the eyes are punched out in such a way that they almost do not have to be re-sharpened. Now the first shape of the scissors can be recognized.

Before the shears are hardened, the hardener squeezes the special rotation in the shear blades. The two shear blades do not lie flat on each other but touch each other during the cutting at one point. The rotation creates a certain space that ensures that the fabric is cut and does not jam. After the hardener has drilled or turned the hole for the screw, he hardens the shears in the furnace but only to the screw hole. Then the glowing parts are cooled in an oil bath. Because the shear blades have now become too hard for further processing, they are again heated to a certain temperature and cooled down. This gives them the ultimate hardness and flexibility required for further processing.

The hardened shear blades are pre-sharpened on modern wet grinders from inside and outside.

The angle grinder now sharpenes the eyes of the scissors from inside and outside. The sharpening of these eyes is a real craft. Take a closer look at the eyes of a pair of scissors and you will see how much surface is being processed. Depending on the model, these are 12 to 20 operations. The grinding of the inside of the eyes is done from the inside on a continuous grinding belt. The eye-cutter rotates the eyes of the scissors back and forth at a certain speed to get the desired curves. Until the 1970s, eye-cutting was a learning profession with a training period of three years. Nowadays this operation is often skipped and replaced by drums (smoothing with stones in a drum). ROBUSO scissors, which do not have a powder-coated handle, are still sharpened today and tomorrow.

The sharpener starts with the grinding of the neck (up to the eyes) and the cutting surface. These are all parts that the machine sharpener has not processed: the back and the two narrow edges of the handles.

The inside and outside of the blades and the handle are blue-sharpened with many Robuso scissors. That is an art and an important quality characteristic of our scissors. Blue ground cutters are finely ground and therefore give off a slightly blue glow. That is where the name blue grinding comes from. The corridor of such a sharpened scissors is light and flexible and also protects against rust. This is important because carbon steel is not rust-free. The sharpener processes the discs that are used with a kind of glue and stretches them with leather. For each type of scissors, ready-to-use disks are ready to be used on the wall.

A particularly accurate work is the sharpening of nickel-plated shears. The soft nickel must be ground out of the cavity and out of the corner so that the scissors are sharp and cut well. When grinding blue, the grinder must approach the hollow-cut side as much as possible. This requires a lot of practice and craftsmanship.

The ready-made sharpened blades now come into the hands of the scissors mechanic. He is also called nailer in Solingen because he used to make the "nails" / screws "" himself. His art is to coordinate the two parts of the shades well and to work well. Firstly, all forged parts are different in character and secondly, unevennesses emerge. With a few accurate taps with the hammer, he makes the two parts of the blade working together. This pointing of the scissors is half-timbered and happens after the screw has been inserted and tightened. In the assembled state, the shear is sharpened and, depending on the model, a micro-tooth is ground into it. Only now is the scissors really sharp. Finally, the passage of the scissors blades is checked from the beginning to the point to see if it runs smoothly and smoothly.

The mounted scissors are now laser-etched with the ROBUSO SOLINGEN GERMANY logo and article number.

The halm and eyes of the blue-ground scissors (not of the nickel-plated scissors) are now powder coated. This is done by spraying and is not an easy task for scissors mounted with thick screws, because the coating of the halm has to stop exactly where the blades start